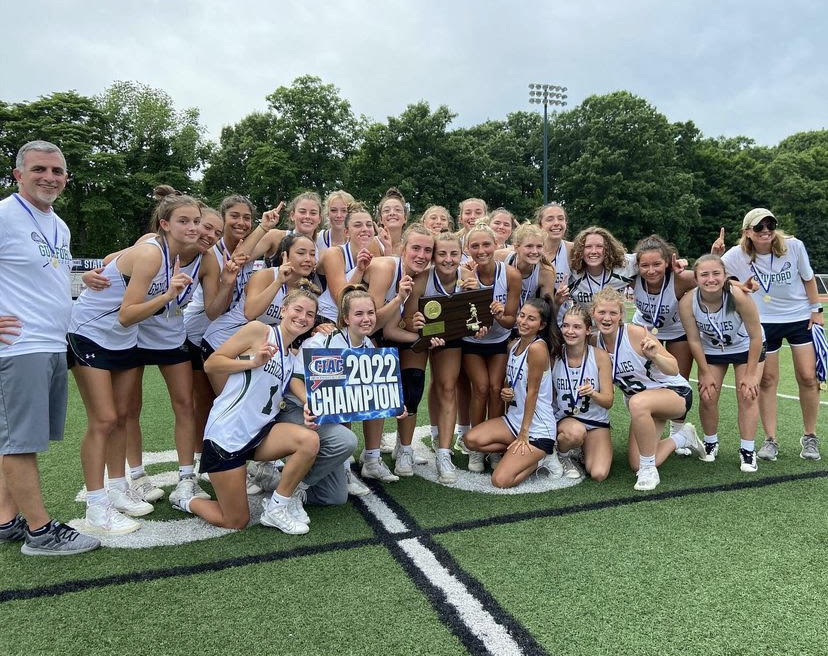 A Blowout Season for the Girls Lacrosse Team

The Guilford girls lacrosse team has certainly made an impact on the high school athletic program these past few years. Following the 2021 SCC and States wins, the girls came into the season with a target on their backs. Starting off the season with a 20-11 loss to Wilton, the girls only improved from there. Their record for the 2022 spring season was one of the best Guilford has seen this year. They went 21-1, with their only loss being to Wilton at the very beginning of the season. The girls were defending champions and knew that they had a job to do. With six seniors leaving at the end of the season, the girls wanted to make sure they sent them off right. And they did exactly that, clutching a 12-6 win over Cheshire in the SCC finals and then a 12-8 win against St. Joseph in the State Championship that was held at Sacred Heart University. They ended the season being ranked #1 in not only SCCs, but also in Class M. The lacrosse team is most definitely an impressive representation of Guilford. Their team is about to send off its six seniors, four of whom will compete at the collegiate level. Maddie Epke will continue her academic and athletic career at James Madison University, while Sydney Widlitz will go on to be a brick wall for Union College. Olivia McDonald will play at Connecticut College and lastly, Taylor Farace will play at Sacred Heart University, where she played her last high school game ever. It is no secret that this team has its fair share of talent. Seven girls on the team this year made first-team All-SCC: Sophomore Payton Root, Junior Kat Baseggio, Junior MJ Santa-Barbara, Senior Lorelei King, Senior Taylor Farace, Senior Maddie Epke, and Senior Sydney Widlitz. Six of those seven received All-State first team, along with Sydney Widlitz receiving All-State second team. The girls put out a very impressive season this year, and will be defending their 4th straight SCC and 3rd straight state title next year. Wish them luck! Go Grizzlies!