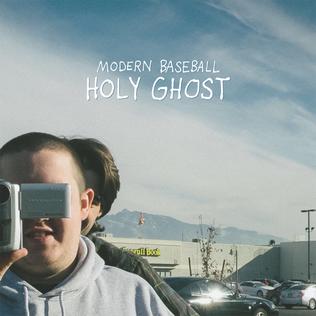 Over the driving guitars and loud drums that many songs share, frontmen Jake Ewald and Brendan Lukens craft an incredibly vulnerable album on Holy Ghost by Modern Baseball.

The songs carry an element of the universal, but are differentiated by the casual intimacy of both the music and words.

The album kicks off with the track “Holy Ghost”. Religious elements play a part in the lyrics, but the song mostly summarizes the tone that is to be expected ahead. Acoustic and lofi, it begins with a spoken “okay”. However, Ewald is anything but ok as he describes the “holy ghost” in question, a presence that watches but extends no help as his life falls apart. The lyrics, “Yeah, my third wish/Has always been three more/But this time, my holy ghost is hovering over me/And I am passed out on the floor” conclude the track alongside a drastic musical buildup from the acoustic sound. The common trope of “three more wishes” is particularly poignant in this context. A presumably inhuman presence may hear the desperate wishes that the narrator feels, but instead of granting these, the ghost acts as an ultimatum: for good or bad, it is hard to know. At the very least, the holy ghost is an end to the needless suffering.

The buildup of the prior track lends a perfect beginning to “Wedding Singer”. A tense romantic relationship is the focus of this song, as Ewald describes the seemingly artificial love and hope both members feel. Though not particularly upbeat in content, “Wedding Singer” is a musical highlight of the album: a catchy riff colors the music with a more optimistic sound, demonstrating Modern Baseball’s instrumental ability.

The prior tracks and rest of the album are all defined by an undefinable sense of intimacy. Ewald, in particular, has a way of making every experience seem personal: incorporating the names of seemingly random locations and people into his songs in a way that makes you feel like you already know them.

“Mass” is perhaps the best example of this. The fourth track on the album, Ewald writes, “And the cashier here is ruthless/Jeanette, I wrote your name down/But I’d hate that job as much as you do/If I was stuck between/Barton and Binghamton too”. These lyrics describe the narrator reporting a cashier to management (presumably for being difficult), but transform this mundane act into one with significance. The listener does not know who Jeanette is, and may not know anything about Barton and Binghamton. However, it is this lack of knowledge that makes the lyrics both deliberate and important in the scheme of the album.

Another high point of the album is the universal messages that appear despite the personal perspective. On “Everyday”, Jake Ewald writes, “Waking up every day

Is all about/Doing things you don’t want to do/But your reward is: You get to wake up”. This nihilistic and slightly ironic take on life defines the feeling of the album: one almost everyone has experienced before. Why live a life that punishes you with the same dreaded tasks? The answer is simple: what choice do you have?

The album is not without weakness, though. Brendan Lukens, an extremely talented writer in his own right, can often feel like an intruder on the personal nature of Jake Ewald’s work. The later tracks of the album—penned by Lukens alone—are different vocally and instrumentally, and often feel more rough around the edges. On some modern baseball albums, these differences provide a strength and much needed contrast. However, a work as personal as this album is delicate.

“Holy Ghost” feels like sitting in a garage during a gray midwinter, one that’s a little too cold, and listening to someone spill out everything they feel. Despite all the details they throw in about their own life, some part of you will always feel like they are singing about yours. It doesn’t matter who they are or if they’re even any good at their instrument—your best friend or a total stranger, novice or expert— because either way, you would feel it too.