Gandhi’s The ‘Quit India’ Speech – What was the goal of his speech? 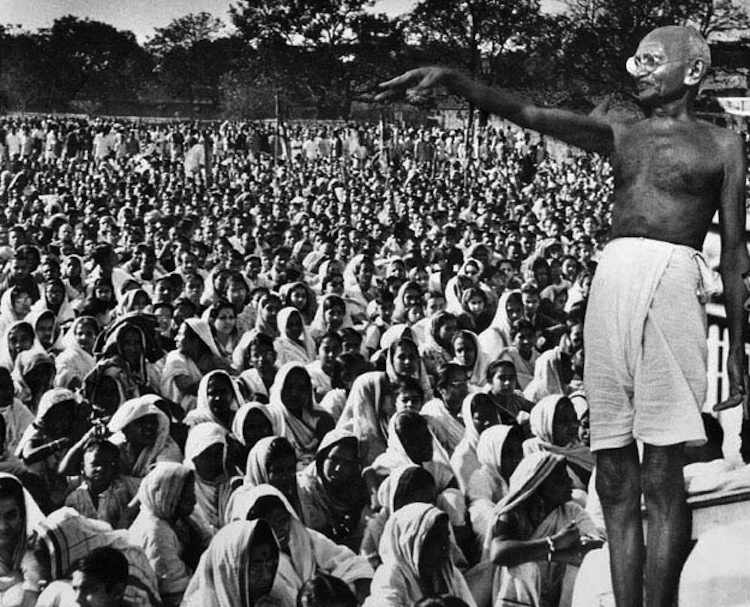 Gandhi was an Indian lawyer, anti-colonial nationalist, political ethicist, and most commonly known as a peacemaker. Gandhi was born October 2, 1869, in Porbandar and died on January 30, 1948, in Birla House, New Delhi, India. Gandhi’s famous speech, “The Quit India Speech”, was written because India was under the control of British rule, and Gandhi’s goal was to make India an independent country and be free of British rule. He did this by making a peaceful protest. His message throughout the speech was how violence is not the answer, and that there are other ways to declare and acquire independence.

Throughout the speech, Gandhi made a lot of important points concerning ways for India to become an independent country. According to “The Quit India Speech”, Gandhi says, “ ‘ This community is microscopic. That party did not play its due part in the freedom’s struggle; why should it have all the power? ‘ “(Gandhi pg 2.). This shows that Gandhi identifies a stereotype in which people believe a country shouldn’t have power if they didn’t fight for it with their “due part” (war, violence, bloodshed, etc.).

Another point Gandhi made was, “Everybody will be his own master. It is to join a struggle for such democracy that I invite you today. Once you realize this you will forget the differences between the Hindu’s and Muslims, and think of yourselves as Indians only, engaged in the common struggle for independence” (Gandhi pg 2.). This shows that Gandhi believes that once we realize we are all “engaged in the common struggle for independence”, we see our similarities and our differences, such as religion, does not matter.

Furthermore, Gandhi makes another point, when he said,  “As a matter of fact, I feel myself to be a greater friend of the British now than ever before. One reason is that they are today in distress. My very friendship, therefore, demands that I should try to save them from their mistakes. As I view the situation, they are on the brink of an abyss. It, therefore, becomes my duty to warn them of their danger even though it may, for the time being, anger them to the point of cutting off the friendly hand that is stretched out to help them” (Gandhi pg. 3). This shows that Gandhi believes that helping people is important even if it is unwanted help. For example, Gandhi wants to help Britain with its distress. He believes it is better to stretch out a helping hand rather than not helping at all.

In conclusion, Gandhi was a very peaceful person who fought without violence but with words and actions. This text is still relevant today because there are many wars, violence, and bloodshed occurring around the world, and we should all try to Gandhi can all teach us a lesson about how violence is never the answer, and we must always be willing to help other people despite our differences because in the end, we are all humans and we all have human rights.